The University of Otago School of Performing Arts proudly announces the three renowned national and international keynote speakers for its UNESCO Cities of Literature Short Play Festival, on from 13-20 September.

Tanya has commissioned and developed more than 150 new plays, and is the Producer/Director of New Play Development at Goodman Theatre, Chicago’s oldest and largest nonprofit / non-commercial theatre. Many of these plays have gone on to full productions at theatres around the US, received major awards, and entered into the contemporary canon.

Fiona is a playwright and dramaturg, and Director of the MA in Dramaturgy and Writing for Performance at Goldsmiths College, University in London. Fiona lived and worked in Auckland 2004-2014, and her plays have been staged at Auckland’s Herald Theatre and by Massive Theatre Company. She has a diverse portfolio as a dramaturg, working on physical theatre, dance, ambulatory and site-specific performance projects. Fiona was also dramaturg for Hilary Halba and Stuart Young’s verbatim plays Hush and Be | Longing. She recently authored Performing Dramaturgy.

Victor is an acclaimed playwright, a former Burns Fellow and all-round enthusiast. His plays include Sons, My Name is Gary Cooper, Ranterstantrum and Black Faggot. He has held several writing residences and currently teaches scriptwriting at the International Institute of Modern Letters at Victoria University of Wellington.

Festival showcasing plays from all over the world

The festival will showcase Dunedin plays as well as work from UNESCO Cities of Literature around the world, including Melbourne, Baghdad, Iowa City, Heidelberg and Nottingham.

The festival will stage around 30 20-minute plays, selected from a field of more than 90 entries. Some will be visiting productions from New Zealand and overseas.

Otago students will act in, direct, and produce most of the programme under the guidance of theatre professionals. The festival offers senior students the chance to gain valuable real world experience in helping to organise an international arts event.

There will also be workshops, forums and readings – all open to the public. 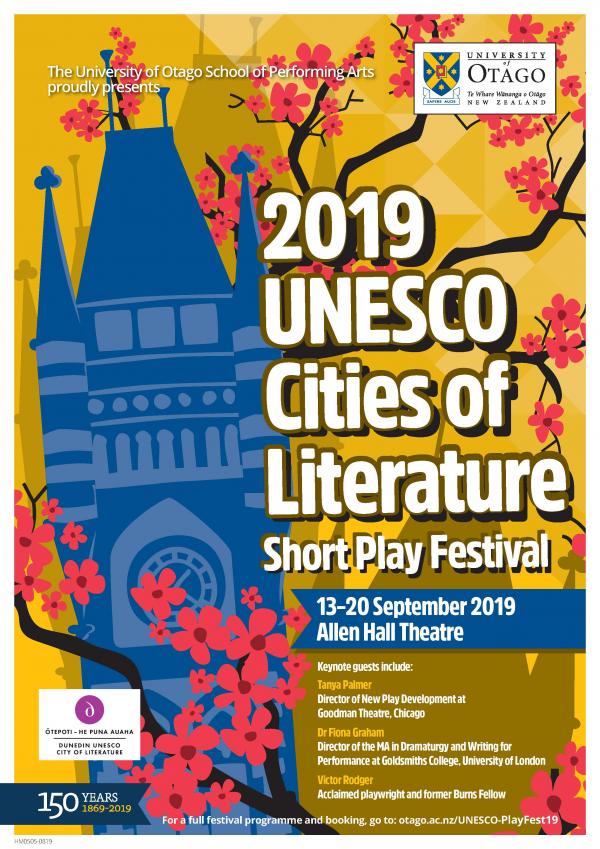