WE ARE DELIGHTED TO ANNOUNCE AND PUBLISH THE WINNING ENTRIES

Dunedin Public Libraries in partnership with Dunedin Public Art Gallery and Dunedin UNESCO City of Literature are delighted to announce the winners of the competition below, and invite you to read these outstanding pieces of work by young local writers.

We challenged students to visit Dunedin Public Art Gallery's A LAND OF GRANITE: McCahon and Otago exhibition web page during Lockdown to view some examples of Colin McCahon's artworks, and be inspired to put pen to paper, creating a story of no more than 750 words. The competition was open to high school students in years 9-13.

If you were unable to attend the prize-giving ceremony at Dunedin Public Art Gallery on 30th May, you may also enjoy reading a transcript of the judge's commentary given by Robyn Maree Pickens. With grateful thanks to Robyn for judging the competition, and for her thoughtful presentation at the ceremony.

It has been a real privilege for me to read and consider the students’ entries, and I have been thoroughly impressed with the quality of the work submitted. All of which makes the process of selecting the eventual prize winners a very difficult job indeed. I also want to acknowledge the extraordinary circumstances in which the entrants responded to this competition. It is my understanding that the entrants were not able to visit the exhibition due to Covid-19 and lockdown, which makes both their perseverance and the quality of their responses all the more impressive. So, thank you each and every one of you for undertaking this exercise under trying circumstances to say the least.

The Prizewinners (in reverse order)

In the end we decided to award joint fourth place to two further entries because of the overall high standard of these two submissions. In alphabetical order joint fourth place is awarded to Angela Fu for Requiem for my Dreams and Oshadha Perera for The Human.

Oshadha’s entry enigmatically covers a vast span of time from the origins of the earth to the appearance of a human being who arrives at a village populated by animals. The human eventually leaves, but his legacy fundamentally changes the village’s animal inhabitants. [Unfortunately, Oshadha was not able to attend the prizegiving]

The other joint fourth award goes to Angela Fu for Requiem for my Dreams. Requiem for my Dreams is an incredibly passionate piece of writing that strongly evokes the protagonist’s longing to move beyond a traumatic event. The protagonist’s grief is expressed in relation to the land- and seascapes of McCahon’s paintings, and ultimately suggests that healing is possible.

In third place is The Hills by Sophie Woodham. The Hills was the only poem among the entries, and as a result of the poetic form, which can be arranged in stanzas, it was the only entry that formally echoed the stacked compositions of McCahon’s later, more abstract works, such as North Otago landscape 2 from 1967. As a poetic work, The Hills begins by describing in art historical or formal terms how McCahon’s paintings function. The poem begins with one word “Restricted” and on the second line begins to elaborate the thought with, “To just a few colours and forms”. In the second stanza the poem makes an interesting swerve into the first person, “I paint only the bones of the landscape”, as if the poem’s speaker becomes the artist himself. Thereafter the poem continues to alternate between describing the forms within the painting, and the act of painting itself, such as applying paint and making formal and compositional choices. It is an interesting strategy that enables the reader to simultaneously consider what is taking place within the paintings and what it might be like to make decisions in the act of painting. Sonically, there are some beautiful lines, such as the penultimate line of the last stanza, “Squally gusts of the howling wind, and restless teetering trees”. Sophie is to be commended for submitting a work that is experimental in terms of form and authorial point of view. The Hills manages to deftly combine poetic, philosophical, and art historical commentary.

Second place goes to Caitlin O’Brien for Flight. Caitlin accurately prefaces her entry as taking inspiration from McCahon’s painting Otago Peninsula (1946-1949). Caitlin draws on the content and perspective of McCahon’s painting and successfully incorporates it into her own work. Flight is sensitively attuned to the vertical view point of McCahon’s Otago Peninsula in which the artist looks down and over the hills. This attunement is most evident in Caitlin’s choice of Kāhu, a harrier hawk, as the story’s protagonist. The story begins with a beautiful description of Kāhu waking up, “Early morning, and a ray of west-bound sun over the monument burns open one small eye a slit.” The “burns” of the “burns open one small eye” is unexpected, and quite literally begins to characterise the force and presence of Kāhu as an active, even formidable protagonist.Essentially, Flight tracks Kāhu’s activities over the course of a day from the sun’s rising to its setting. In addition to expected activities such as hunting prey, Kāhu is portrayed as an attentive and contemplative character, which enables Caitlin to focalise the hills and ocean depicted in Otago Peninsula as if seen through the hawk’s eyes. Caitlin’s ability to, as it were, get into the character of a hawk is thoroughly impressive. Kāhu is not only able to see the anatomy of the landscape, but to intuit the wairua of the land and associated entities. Although the keen eyes of the hawk enable it to also see the landscape in fine detail absent from McCahon’s paintings, Caitlin’s ability to make plausible the consciousness of another being (a hawk), and the language in which she narrates Kāhu’s day is remarkable.

The winning entry is Hills by JA Thea, which struck me as highly original, and as with Caitlin’s description “burns open one small eye”, this is a piece of writing full of unexpected moments — all of which take place in the mind of the story’s unnamed protagonist, who the author describes as a “girl.” Focalised through the imagination, self-awareness, and compassion of the girl’s consciousness, Hills manages to strike a balance between the seemingly small familial world of the girl and the physically and philosophically large expanses of McCahon’s landscape forms. I say, “seemingly small familial world” because perhaps on first glance this short narrative about a girl getting out of a bath, considering her soft feet, thinking about her brothers and noticing her mother’s tiredness with her fourth pregnancy could seem far removed from McCahon’s celebrated attempts to redact large landforms to their essence. The success of Hills lies in its ability to make compelling correspondences between things that are considered significant, such as distilling the land to its essence, and things that can be treated as less important, such as a young girl’s experience of family life and, in this case, her mother’s fourth pregnancy. Hills begins by reimagining the hills and surrounding ocean of McCahon’s Otago Peninsula as — and this is the story’s opening line — “My knees poke out of the bath like islands, godlike heads lifted from the sea.” After reading this line I’m not sure it is possible to see at least two of the hills in Otago Peninsula as anything other than a girl’s knees. This reimagining begins an entire chain of similar associations or transpositions even, where the bodies of the girl and her mother are mapped onto Otago Peninsula and reciprocally, the landforms onto the girl’s domestic world. Even when the girl’s thoughts appear to stray beyond this mapping, as in the line, “Maybe in her belly is a thing with wings”, which is a deliciously unexpected imagining, this line can be associated with the vertical vantage McCahon takes in Otago Peninsula, and to which JA has likewise woven into her own fictional setting in “the peak of this hill”. Hills is in conversation with McCahon’s paintings, particularly Otago Peninsula, and the painting is all the richer for the dialogue enacted by this story. 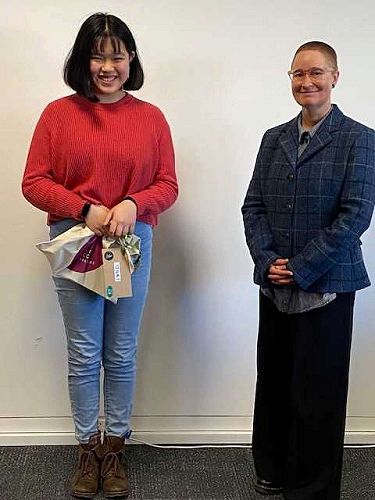 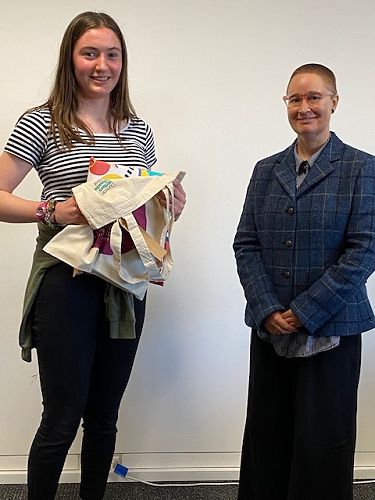 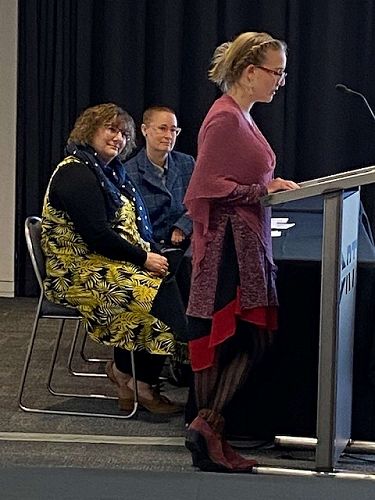 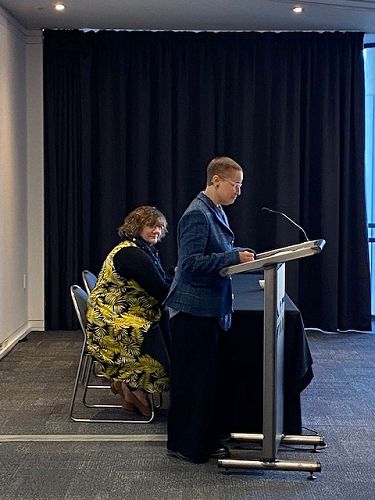 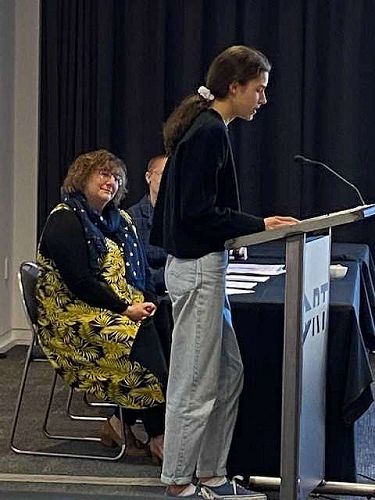