Dunedin UNESCO City of Literature is thrilled that two new plaques have been added to the Dunedin Writers’ Walk in the Octagon. An unveiling ceremony was held at Dunedin City Library to celebrate the inclusion of two writers of enormous significance to Ōtepoti, the late O.E. (Ted) Middleton and Peter Olds.

Both Ted Middleton and Peter Olds were University of Otago Robert Burns Fellows and a part of the cultural fabric of the city, Mr Hawkins said.

Suzanne Middleton (Ted Middleton’s daughter) spoke of the importance of the Burns Fellowship and how the opportunity this offers recipients was visionary. Dunedin is fortunate to have had benefactors who helped ensure that creativity in the city flourished to this day. Peter Olds’ Publisher and friend, Roger Hickin, described Peter’s life and work and his ongoing commitment to documenting the city.

Guests were treated to some well-chosen readings and insights into the lives of both writers by Ted Middleton’s partner Cynthia Greensill, and Jenny Powell and John Gibb, long-term friends of Peter Olds. Nicky Page, Director City of Literature called the gathering of family and friends ‘‘heartwarming, heartfelt, and actually very moving’’. 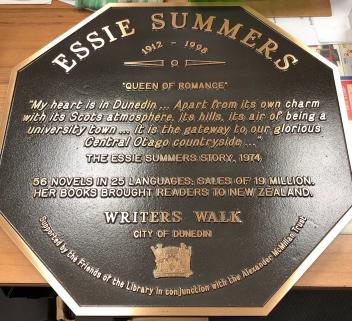 On Saturday 8 May 2021, Essie Summers, peerless romantic author, with sales of more than 19 million novels worldwide, was celebrated with a newly unveiled plaque on Dunedin’s Writers’ Walk. An official unveiling ceremony with an opening address by Mayor Aaron Hawkins attracted a crowd of enthusiasts and members of the author’s family. The occasion was an important part of the Dunedin Writers & Readers Festival 2021.

Coinciding with an exhibition at Dunedin Public Libraries’ Reed Gallery titled ‘Seasons of Summers’ this and other events held in conjunction with the unveiling of the new Essie Summers plaque were extremely popular.

The project was the result of many collaborations and partnerships: The Dunedin Public Library Association Friends of the Library, The Alexander McMillan Trust, Dunedin UNESCO City of Literature, DCC Urban Design Team (for location selection) and the DCC Transport Team (for installation). The new plaque located in the Octagon at the base of the Robert Burns statue, is a significant addition to Dunedin’s Writers Walk is perfectly placed to attract ongoing attention from residents and visitors to Dunedin.